Starting with 1.14.0 the default output file name is generated using a template string set in preferences. The template syntax is described below with default value being

The template is a string with optional substitution variables enclosed in curly braces like {NAME}. For each title MakeMKV would expand the variables and assign the produced file name. If the produced file ends up being unique, that would be the file name you'll get. If your template would produce the same name for different titles, MakeMKV would still add _txx suffix. So it is highly recommended to use one of the variables to generate unique file name. The default template always generates unique file names.

There are 3 important attributes each title may (or may not) have, that define the value of substitution variables:
Name - this is the title name that usually comes from disc metadata, or the value assigned in GUI.
Comment - the comment string for title that comes from disc metadata. Cannot be changed in GUI, usually present on blu-ray discs with fake playlists.
DateTime - the date and time when the title was recorded. Always present on AVCHD discs, almost always present on BDAV discs.
These attributes define the values and presence of some substitution variables.

All variables that hold the numeric value can have an optional suffix that specifies how many digits to use. For example the variable {AN} is always defined and holds the value of title id. One can use the {AN} directly or specify number of digits manually - {AN1} {AN2} etc. The default precision is variable-specific. For example, the variable {SN} holds the source title id if it is present. For blu-ray that would be id of mpls or clpi file, and for DVD that would be original title number as encoded in IFO. So value of {SN} on blu-ray could be "00000" and on DVD "00". But the value of variable {SN2} would be "00" in both cases.

{DFLT} - a special variable. This variable is defined only if nothing was added to the output file name buffer so far. So the token {something:+DFLT} would produce "something" only if the file name is still an empty string - meaning all variables before were expanded to nothing.

{NAME1}{-:CMNT1}{-:DT}{title:+DFLT}{_t:N2}
If name is present, it is added with cleansing level 1, if comment is present then "-" is added following the comment cleansed with level 1, if recording date/time is present then "-" is added following "yyyy-mm-dd hh:mm:ss" string. If nothing was added so far (no name, comment or date/time) then the "title" string is added. Then the "_txx" suffix is added, where xx is a two-digit title id.
This is the default template.

{NAME}{tilte:+DFLT}{_t:T2} - Name with cleansing level 0 is added, if name is not defined then the string "title" is added instead. For title #0 nothing is added, for the rest the "_txx" would be added where xx is a two-digit title id.

{NAME1}{title:-NAME}{-:SN} - Name will be added, if name is not present then string "title" will be added, following by source title id (DVD id or MPLS id) if present.

Also, please note that the "default output file name template" is a "live" settings value. That means that you can open the disc, go to preferences, change the template, and MakeMKV would re-assign default names using the new template for the already-opened disc. This is the easiest way to play with this setting.
Top

Then the Advanced tab will be available, and the template is the third text entry box.
MakeMKV Frequently Asked Questions
How to aid in finding the answer to your problem: Activating Debug Logging
Top

Who knew! Thanks.
Top

mike admin wrote: ↑
Thu Nov 08, 2018 1:31 pm
Starting with 1.14.0 the default output file name is generated using a template string set in preferences. The template syntax is described below with default value being

Thank you very much
Top

The 'Comment' property is interesting in identifying the 'extras' in the extracted files. I can only get it on some Blu-ray though and in particular from Lionsgate when the JRE used.

Is there a way to get DVDs and other blu-ray metadata so that file identification is easier than going through each to work out which extra they relate to?
Top

thanks from this newbie

Edit: just found a thread that points to how this is done in MakeMKV. I will experiment there. But I would like to do this with BatchMKV for multiple ISO files in the queue.

Edit2: Got it! "{source-isfile}.mkv" works for this! I'll leave this up in case anyone is looking for this in partcular.

Edit3: No I don't. Anyone can help? Which tag and where to put it? Preferably in settings so it is set for all conversions. Thx. I'm using BatchMKV so far. So settings in MakeMKV that would work when using BatchMKV or in BatchMKV itself.

- Ok, this time I do have it! Sorry for this ongoing process, but I'm pretty sure I've got it licked. Here's the settings in BatchMKV (Default title settings): 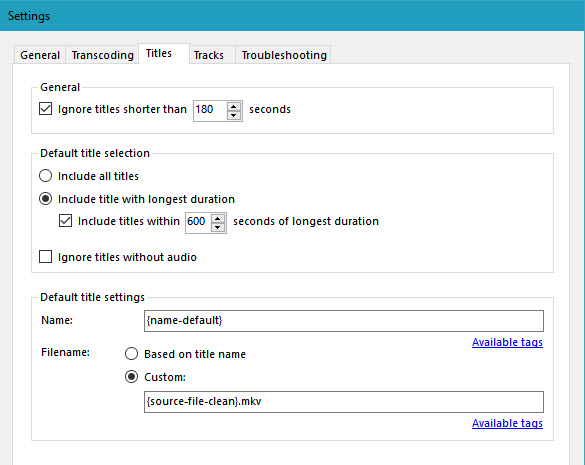 Is there anyway to specify a base track number ideally for a given rip? It would be nice when ripping a season of something that the files could all start out with the correct episode numbers rather than having to fix the titles up afterwards.
Top

I am also interested in a base number which would auto-increment for a given rip so that if several episodes are on a disc, the episode number is incremented for each file name.

The best I can do now is "{Monk:+DFLT}{ s01e:M2}" and then edit each file name before burning
Top

Is there a way to use the Disc Label as the file names automatically? This would be helpful when ripping a TV show...

Copy / paste is getting old...

I've been doing the manual naming for a long time, and once you set the DISK name, that makes it go faster, especially if you're fine with keyboard navigation and are in Expert mode.

Disk is first disk of "Land of the Lustrous". It has episodes 1-9 on it.

At this point, the FILENAMES will be (depending on your template) something like "Land of the Lustrous HD01_t00.mkv". You can change them before the rip, or wait until after, but the episode number will be in the filename.

Doing this with a mouse is tedious. Keyboarding is much faster.
MakeMKV Frequently Asked Questions
How to aid in finding the answer to your problem: Activating Debug Logging
Top

I keep getting an error when I try to use {M}.

Then it shows the filename ends up being:
G_Gundam_S1_BD2!ERRtemplate_t00.mkv

Is there a trick I'm missing to using the "starting at 1" numbering scheme for title ID?
Top

Hi I am using makemkv to rip dvd in manual mode is there a way to change the output to show chapters?

It would make things alot easier for me if I could do this then I could rip all my dvd's to one directory and convert them form there.

Thanks for reply.
Top

Thanks to Mike and Woodstock et.al.!
My humble request is to add an offset to begin the track numbering.
I use the following for TV series and would love to be able to start the suffix numbering with other than 1 (or 0):
After entering the title with "-s01" attached, the following numbers it correctly for Plex....
{NAME1}{-:CMNT1}{-:DT}{title:+DFLT}{e:M2}
Thanks!
Top

I'm using makemkvcon on debian. Where (path/filename) can I place the settings for output file name template?

EDIT: Is it even possible to configure a default output file name template, using only the commandline-tool makemkvcon on a linux-system?

Thanks in advance and have a nice day,
Rainer.
Top
Post Reply
32 posts