With subtitles, what do I need to do for foreign dialogue only, say an English language film/TV show that has some spoken parts on another language?

This is a screenshot of the offerings from Breaking Bad Season 4:

What's the difference between the 'MKV Flags: Default' subtitle track and the non-default one?

by Woodstock
Rip all subtitles, then watch the feature in VLC and find out which tracks are the ones you want. You can use other tools to remove or rearrange the tracks to bring the desired one up to the "default" position.

Officially, there is a standard that says individual subtitles within a track can be flagged as "forced". These are generally signs and on-screen writing, for use when you have the dubbed audio.

In practice, that's rare. I have seen it done that way ONCE, with Avatar. Everything else in my collection has a separate track for the "forced" subtitles and for "all" subtitles, for each subtitle language. And, you can ask MakeMKV to build a "forced only" track by checking the "forced only" box next to each subtitle track when you expand the title's information (click on little triangle next to title listing in left-hand menu). But, if no forced-only titles exist, that track will be removed.

by ldoodle
Thanks Woodstock, but unfortunately I'm none the wiser.

When I read Season 3 Disk 2 DVD of Breaking Bad in MakeMKV (I know 100% that episode 6, which is on Disc 2, has foreign dialogue), I only get one English subtitle track listed, so I selected this as per this screenshot:

But when I playback the resulting MKV in VLC I don't get any subtitles at all, and when I enable the English subtitle track, the whole episode is subtitled, not just the foreign dialogue.

I don't see any options to make subtitles "forced".

PS: I use JRiver Media Center as my HTPC front-end.

by Woodstock
I have no idea about subtitles on Breaking Bad.

I do know that other titles ignore certain languages when it comes to subtitles, expecting you to pick up what was said through other context. Men in Black, for example, has burned-in subtitles for when Kay is interviewing the Mexican immigrants, but nothing when "Mikey" is talking later.

Take Lord of the Rings for example (which I also have on DVD): the Elvish dialogue is subtitled, so how would I go about getting subtitles just for that dialogue, and not the whole film?

Does MakeMKV only really work with Bluray's or something?

by Woodstock
MakeMKV works quite well with subtitles on both DVD and BD - 95% of what I rip is Japanese animation, and MakeMKV would be useless to me if it didn't handle subtitles.

But what the disk authors do has little to do with any standard ways of doing things. There are standards for how you can "do a thing", but there is no standard that says you must "do THAT thing". Using the forced flag on subtitles is one of those seldom-used standards.

I've complained to vendors at industry shows about their subtitle habits. Their response typically is, "we hear that a lot", but they don't fix it.

by Chetwood
Which is a complete dick move when you think about it, given how easy it would be to author discs like this.

Woodstock wrote:MakeMKV works quite well with subtitles on both DVD and BD - 95% of what I rip is Japanese animation, and MakeMKV would be useless to me if it didn't handle subtitles.

Would you mind posting a screenshot of what you've got selected when ripping one of the Japanese discs (DVD if possible).

I'm clearly doing something wrong because it shouldn't be this hard, but nobody knows what!

by Woodstock
No problem on screen shots.

These pictures are from DVD and BD copies of the same title, disk 1, using my default selection rule of: 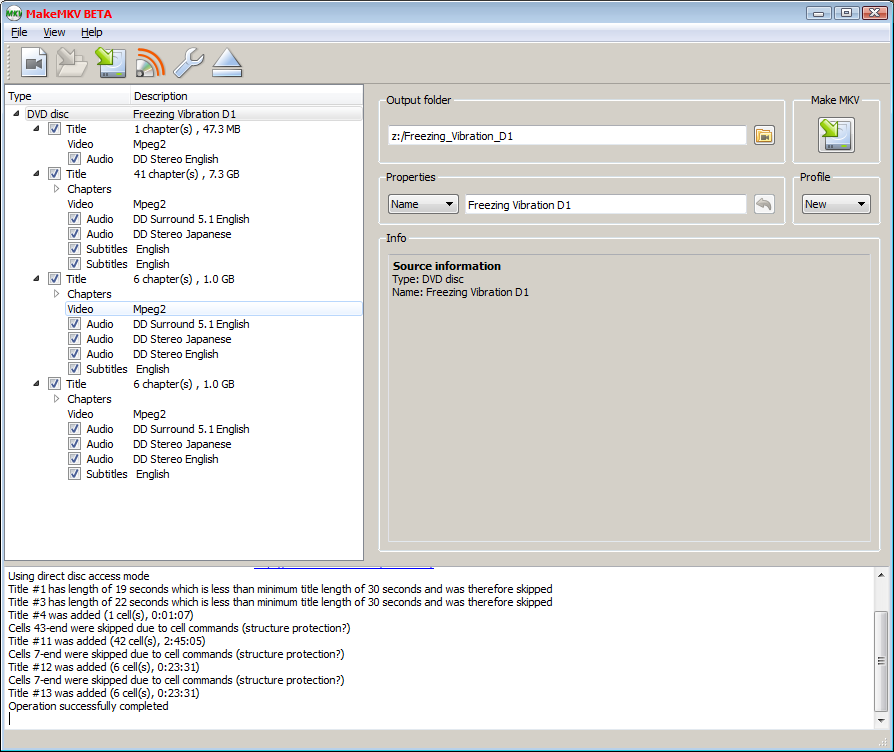 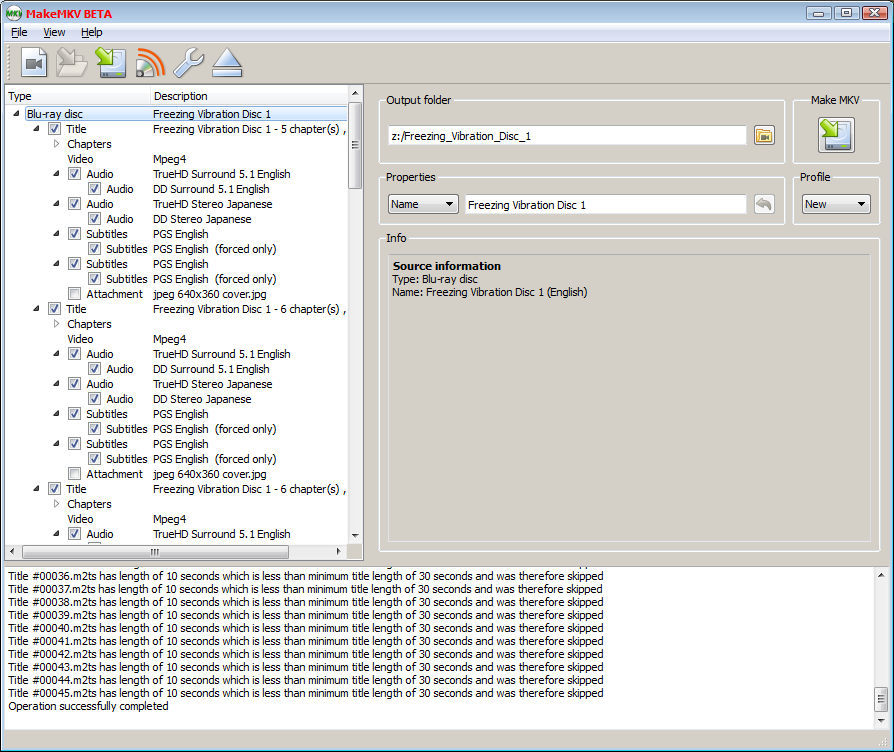 When I rip the BD, the "forced only" tracks are deleted as empty:

In this particular case, the FIRST subtitle track is EVERYTHING. Many players will play this by default. The "forced only" track is the SECOND English track.

Would it have anything to do with the minimum title length? I.e. would a forced only subtitle track (that has say only 58 seconds of text) be skipped with the default minimum of 120 seconds?

Or are subtitle tracks excluded from the minimum title length?

by Woodstock
The minimum length applies to a title, not tracks within that title. All tracks are the "same length" within a title. Some just do not have any information that applies to a specific time within the title.

But, with the default settings MakeMKV uses for Bluray, it will try turning each subtitle track into two - one of which would only have those that are flagged as "forced". At the end, if the forced track is empty, it's removed. Avatar is the only title I own that did NOT have the constructed forced track removed.

by ldoodle
OK, I was wrong.

Just put the disc in my PS3 and played it... don't get subtitles either unless I put subtitles on, which then has them for the whole episode.

This has got to be a wind/cock up surely? How the hell I are you supposed to understand what they're saying!

So what's the solution?

by ldoodle
Can it be made possible for MakeMKV to extract the subtitles to separate .srt files, without having to do it afterwards with mkvextract?

by Woodstock
MakeMKV isn't normally going to generate "just" a subtitle track in a file in any case, but, if you're ripping from DVD or BD, you need to run optical character recognition software to convert to SRT format.

Before I got a hardware player that supported BD subtitles in MKV files, I seriously looked at options like that.
All times are UTC
Page 1 of 1